Every year, Hytrol, a leading conveyor manufacturer in the material handling industry, celebrates Loberg Day. In honor of Hytrol’s late founder, the executive leadership team at Hytrol take a break from their usual routine of meetings and strategic planning and spend the day working on the manufacturing floor with their staff. On a recent Loberg Day, Chris Glenn, Hytrol Vice President of Operations, chose to work on the company’s powder coat and paint finishing system—its new IntelliFinishing turnkey finishing system.

“In the past, I’ve worked in fabrication and other areas, but this year I wanted to work in paint, so I loaded and unloaded parts all day,” said Glenn with a smile. “Everything was great that day. We saw really good productivity. I enjoyed it a lot. The IntelliFinishing system has been fantastic for us. I started out in sheet manufacturing 22 years ago, I’ve worked with monorail systems, and I’ve had some power and free system experience, but this is the best power & free type system I’ve ever been a part of.”

Before its installation of the IntelliFinishing system, Hytrol was utilizing an outdated power and free conveyor system. After evaluating potential replacement solutions for its old system, it was not a new power and free system that provided the most innovation solution at the most cost-effective price. Instead, it was IntelliFinishing, a turnkey finishing system that offers a revolutionary modular conveyance and control technology that provides ultimate flexibility and superior output. For Hytrol, the result of its migration from a traditional power and free conveyor to the IntelliFinishing system, was a 33% increase in productivity year-over-year, a positive return-on-investment, and higher employee satisfaction.

IntelliFinishing is committed to customizing the planning and installation of all its finishing systems. For Hytrol, it helped to design an extremely compact solution that immediately freed up floor space on the Hytrol manufacturing floor. For maximum efficiency and cost savings, it even incorporated into the plan repurposing some components of the previous power and free system that still retained some value.

“IntelliFinishing designed our current solution around our existing booths,” said Glenn. “Now we have room for one more booth and an expansion that we’re planning for next year.” 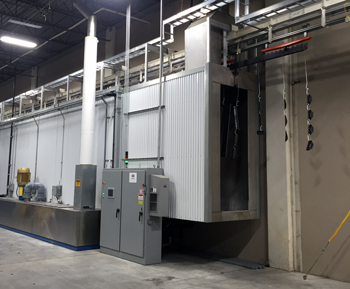 The smaller footprint of its IntelliFinishing system does not mean Hytrol has less capacity. In fact, it can now accommodate heavier production parts than it ever could with its old power and free system.

“Our system can hold up to 1,000 pounds,” said Glenn. “With power and frees, you’re often limited in the weights you can put on the line. We now have greater capabilities to paint some pretty heavy equipment that we wouldn’t have been able to paint on the line before. We would have had to paint them manually in a small booth.”

“Our system has been a huge success. We wouldn’t be doing the volume we’re doing today. We’re up 33% over last year with the help of the system. We know we’re getting some parts off faster on the new system based on the speeds that we’re able to run, and we’re still not even at full capacity.”

Not only is Hytrol’s paint line more productive, but it is also producing a higher quality product.

“The quality of the product coming off the line is much, much better,” said Glenn. “We’re seeing about a seven or eight percent decrease in quality issues. We had so much turbulence in the old system, and we dealt with a lot of contamination.”

According to Glenn, IntelliFinishing’s decentralized drive system and the visibility it offers keeps production moving efficiently.

“With the IntelliFinishing system, if we get a carrier that’s hung up, we’re back up and running in no time,” You can’t back something up with a power and free system, but we can do that with the IntelliFinishing system. Plus, with its integrated controls, we can look anywhere in the system and see where a carrier is at, what color it’s going to be, what the drive signals are, or if we have a drive fault. The ability to go anywhere in the system and see those things is tremendous for us.”

Glenn estimates that with its former power and free system, Hytrol experienced a downtime of about 10 to 15%, which limited its productivity.

“We had jams every day with our old power and free system, which is typical of any power and free system I’ve ever been a part of,” said Glenn. “Downtime is still 5 to 10% even if it’s a brand new power and free system because you’ll have carrier hang-ups and different jams that you’re dealing with. With a power and free system, you have a continuous rate that your whole chain is fed. You can only speed the whole line up or down. With the IntelliFinishing system, you can slow things down based on the recipes that you have. We have some areas that are very hard to paint. With our old system, we would have to slow the whole chain down, which we couldn’t do in a lot of cases because of the throughput we needed, so we would de-dog a carrier and push it back into the booth to finish painting it. Now we can slow that part down or stop it in the booth when we need to.”

An Increase in Labor Productivity

Hytrol has also seen an improvement in its work-in-progress at assembly.

“Our first pass yields went up about 10% after implementing IntelliFinishing,” said Glenn. “A lot of it has to do with the pre-verification coming out of fabrication. You can see any of those carriers anywhere. You know exactly how many carriers you’ve got left on that particular card. We’re able to track that information so much better. Now, our assembly line staff can say, ‘I need this FO, when is it going to be ready?’ And we can look exactly where it is in the system and estimate when the part is going to come off.”

“We’re seeing about a 10 to 15% labor savings,” said Glenn. “We are using more labor because we have more lift stations and can paint in all three booths at the same time, which is something we were not able to do with our old system. However, if you look at our overall labor number today, compared to the volume we were producing previously, we’re able to maintain a lower percentage of labor based on production volume.”

“With our previous system, we were working seven days a week,” recalls Glenn. “Now, we only work five to six days per week and the only reason we’re working so many Saturdays is just to support the other production areas. There have been several days this year that we were able to send some people home from our paint unit because we’ve done so well with the IntelliFinishing system.”

A Positive Return on Investment

Not only has the IntelliFinishing system allowed Hytrol to increase its production, but it has also reduced some of its ancillary costs. 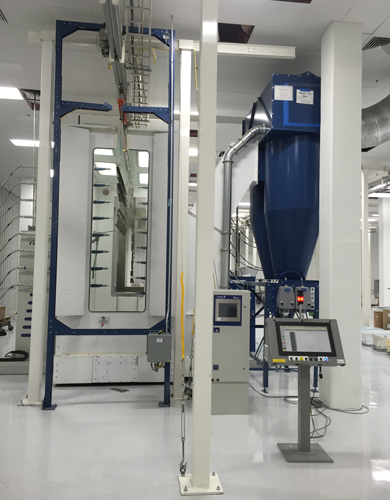 For the paint system staff at Hytrol who are instrumental in the success of its operations, the transition from a conventional power and free system to the IntelliFinishing system required some initial adaption. However, having spent a year enjoying the greater productivity of the IntelliFinishing system, Glenn’s staff report they never want to go back to a conventional power and free system.

“There was a lot of apprehension at first, getting used to the HMIs, but now if you ask any of our employees who work on our paint system, they’d never want to go back. They are comfortable on the HMI’s now, and they like that they can look ahead to what carrier is coming and what color it is. They are excited about our future expansion and the other solutions we’re looking at.”

According to Glenn, IntelliFinishing’s commitment to customer service and its quality solutions are an important factor in Hytrol’s continued partnership with IntelliFinishing, a division of Kasa.

Webinar – Designing Your Paint System for the Unknown

The Advantages of Using Robots in Finishing with an IntelliFinishing System

Why You Need a Flexible Finishing System

When Should You take a Site Visit when Planning a New Finishing System?