Home > Blog Entries > How Important is Part Window in a Finishing System?

How Important is Part Window in a Finishing System? 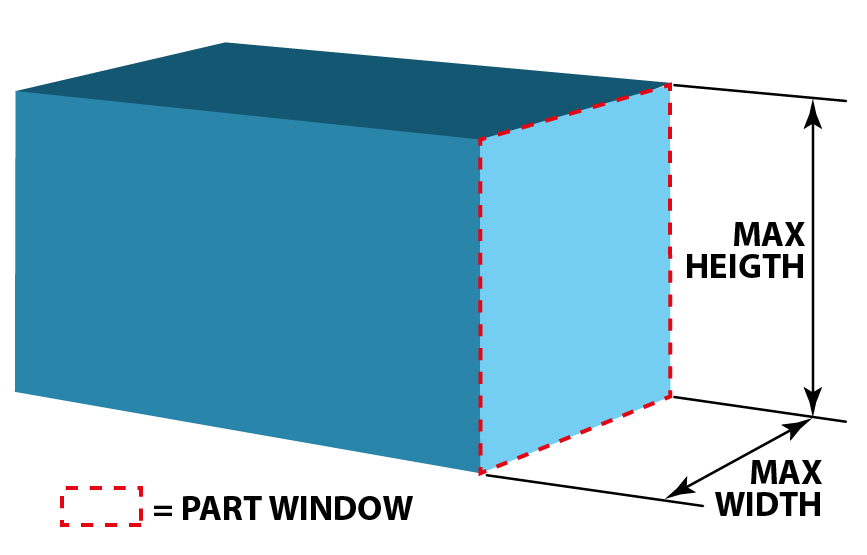 For IntelliFinishing Systems, part windows are usually calculated to accommodate the largest single part or combined part dimensions. Typically, the tallest and widest parts are determined, and those dimensions define the part window. Often, this is the same part, but it could be several very different parts.

Another aspect to consider is the orientation of the part as they move through the system. We tend to think of the height of a part based upon how it is seen when in use, but parts do not necessarily have to travel through a system in the same orientation. They can be hung “on their sides” or at angles to fit a part window better.

Examining The Cost and Effectiveness of Part Window Size

In general, it’s somewhat less expensive for a part window to be taller rather than wider. It can also be more effective for some processes, such as a wash pretreatment, for the part window to be narrower so that spray nozzles can be closer to the parts and the center of the part window. Turning parts so they are taller and slimmer when on a system can be suitable for both system design and cost and process reasons.

Does part window size determine the initial costs of the system? Yes and no. Unusually large part windows can dramatically increase the price of a system once you get beyond a standard size. For example, if the width is much bigger than six feet or the height exceeds eight feet, the costs for process equipment can increase much faster than they would be leading up to this size.

Carrier length, of course, has a lot to do with the cost of the system. Larger carriers will cost more because each piece of process equipment needs to accommodate more extended potential parts. However, even more, important is simply throughput. Throughput for an IntelliFinishing system is usually expressed as carriers per hour. There is a direct and somewhat proportional relationship between carriers per hour and the total amount of conveyors, the cost and size of ovens, the number of booths, the size and style of pretreatment options, and the number of other system stations, for example, for loading, unloading, masking, etc.

To the height and width of a part, another consideration for an IntelliFinishing system is the maximum part length. Since an IntelliFinishing system utilizes carriers to transport components through the system, the carrier is often the same size as the most significant length part the system will be handling. So, let’s say a company’s longest part is 15 feet long, but they have many elements that are much smaller. The carrier is usually made to handle the longest part at 15 feet, and all pieces smaller than 15 feet can be mixed and matched on a carrier to fill up the volume.

What is the biggest part window an IntelliFinishing system can accommodate? We’ve not yet determined the limits of what our system can accommodate for a part window. With that being said, the largest part window we’ve installed to date was for gooseneck trailers that are up to 52 feet long, 9 feet wide, and could be up to about 9 feet tall. Systems could easily exceed these dimensions, and indeed some have been considered by potential customers and drafted up, but the system at Load Trail in Sulphur Springs, TX, is the largest part window…so far.

Can You Expand That Window Once The System Is Installed?

It’s not easy to expand the part window once a system is installed. The walls and openings of the process equipment are designed based on the part opening, and to make those openings larger would require cutting into that equipment. Some pieces of the system may be more forgiving in this regard than others. That said, there is always someone who finds a way to push the system’s limits. Another consideration on a part window is the impact on turns. Simply placing a wider or longer than usual part on a system may cause that part to run into structural elements designed to expect a narrower part. With an IntelliFinishing System, increasing the number of carriers per hour the system handles is possible, but expanding the part window is generally not done.

IntelliFinishing systems are designed to bring you greater efficiency, quality, and flexibility in your part finishing process. Determining the part window is often the first of many steps to design a system customized exclusively for your needs.

Steel Prices and the Impact on Finishing Systems